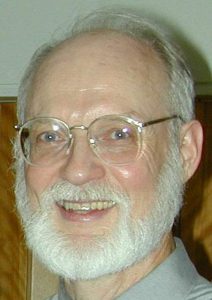 I have lived in Moscow, Idaho since August, 1972.  I was born in North Platte, Nebraska, but soon moved to Medford, Oregon, where I did my primary and secondary schooling.  I attended Oregon State University and graduated with honors in philosophy and religion in 1966.  I have an M.A. and Ph.D. from Claremont Graduate University. At Claremont I was mentored by James M. Robinson and John B. Cobb, Jr.

After graduation from Oregon State, I received a Rotary Foundation Fellowship for a year’s study in Denmark.  I returned to the U.S. in 1967 for three years of graduate work in Claremont, California.  In 1970, I was granted a Fulbright Graduate Fellowship to study at the University of Heidelberg.
During my Fulbright year, I returned to visit friends in Denmark and married my best Danish friend’s sister in August, 1971.  (We divorced in 1988.) We spent one year in Denmark, and I finished by dissertation while teaching at two Danish universities. Cheryl Miller-Arndt, who teaches at Eastern Washington University and is a specialist in children’s studies, has been my life partner since November, 2013.

I have one daughter Christina Bindslev Gier, who received her Ph.D. in musicology at Duke University and she taught for 20 years at Duke and the University of Alberta. She and her husband reside in Edmonton, Alberta.
In 2003 I retired from the University of Idaho where I taught philosophy and religion for 31 years.  Even more gratifying than publishing five books and 46 articles and book chapters was the experience of teaching and learning from over 6,000 students in my classes.

For 23 years I was Coordinator of Religious Studies.  In that capacity my colleagues and I were successful in establishing a minor in Religious Studies and developing a new “core discovery” course entitled “The Sacred Journey.”  It is unfortunate that some people on the Palouse consider me “anti-Christian,” especially since I have worked successfully with liberal and conservative Christians over the years, not only on campus but in my professional organizations.

When we actually received a paper paycheck, the top of the pay stub always reminded us that our job was “Teaching, Research, and Service.”  I way I chose to fulfill my service function was to speak to churches and civic organizations on a regular basis, and teach religious education to the youth at the Unitarian Universalist Church of the Palouse. I also wrote write guest columns and letters to the editor.  My first letters to the editor were to the Corvallis, Oregon newspaper and the topic was mainly the Vietnam War and how much I was against it.

I was a columnist for the University of Idaho Argonaut (1983-84), and I am now a columnist for the Idaho State Journal and the Moscow-Pullman Daily News.  Previously I wrote columns for the Sandpoint Reader, the Los Cabos Daily News, and the on-line journal New West.  Since Christmas of 2005, I’ve recorded weekly radio commentaries for Radio Free Moscow at 90.3 FM.  My radio “handle” was The Palouse Pundit.

In June 2011 I received a bronze medal (sounds better than 3rd place, doesn’t it?) for column writing from the Upper Intermountain Associate Press Annual Awards.  After four years of submitting political/religious topics, this year he entered his personal/humor columns, and that was the trick. Read my all-time favorite about my mother at by clicking here.

I consider myself a liberal in the classical sense of balancing liberty, equality, and community, the three great values of the French and American Revolutions.  In my signature column entitled “We are all Liberals,” I argue that in so far as today’s conservatives and liberals share these values, they, too, are classical liberals.  Unfortunately, there are still some, while not supporting the divine right of kings, nevertheless reject the liberal values of equality and liberty.  I call them classical conservatives, but some of them would rather be called paleo-conservatives, a word that I think suits them just fine. A good example is Doug Wilson, a former student and current pastor of Moscow’s Christ Church. For more on Wilson click here.